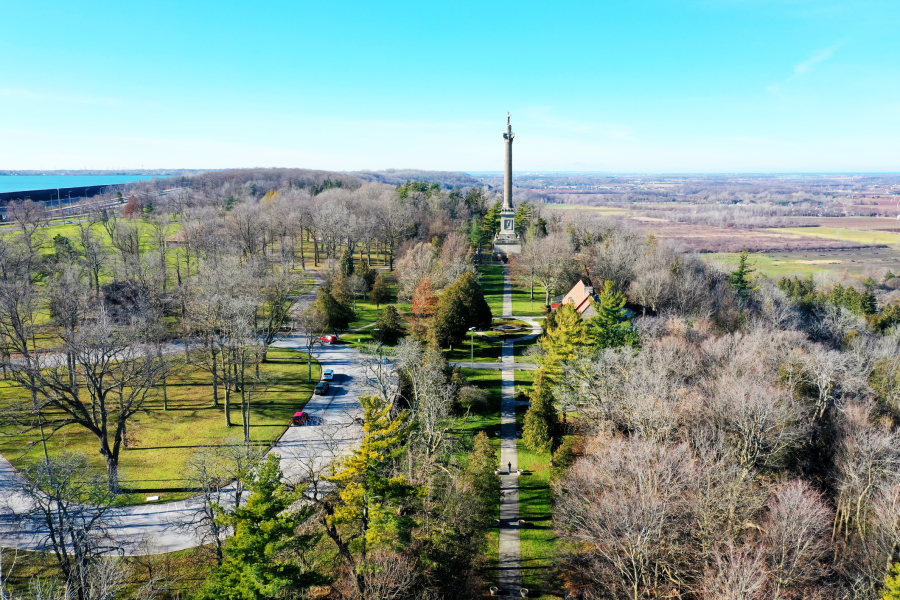 You might know Queenston for its soaring Brock monument, the beautiful Queenston Heights park, the site of the Battle of Queenston Heights, which took place during the War of 1812. However, did you know that Queenston is also a charming residential village with stunning 19th century architecture and a gorgeous view of the Niagara River?

Whether you’re interested in exploring our current listings in Queenston or are eager to learn more about its history, this month’s blog post is dedicated to showcasing this amazing piece of Niagara-on-the-Lake’s community.

Exploring Queenston: Past Meets Present on the Niagara Escarpment!

Prior to being colonized, Queenston was home to Anishinaabe and Haudenosaunee people, who had established valuable trade routes in the region. The Iroquois Trail, also called the east-west route, served as the foundation for the eventual village. Queenston was settled in the 1770s, where it was dubbed the “Lower Landing,” by the Loyalists who moved to Upper Canada. Eventually, the town’s population and infrastructure expanded to include roughly 300 citizens and a variety of homes, wharves and other buildings were erected there.

Following the American invasion of Queenston in 1812, the town was destroyed and eventually re-built. Over the next century, the village was home to various historical figures, such as Laura Secord, Sir Issac Brock and William Lyon Mackenzie, and amenities, including a horse-drawn railway, ferry crossing and the popular Queenston Heights Park.

Despite its long history, Queenston is home to roughly 400 citizens and boasts its own Queenston Residents Association, whose members work to preserve the town’s unique character. According to Niagara Now Magazine, the Queenston Residents Association is dedicated to preserving the town’s name, and advocates for the sharing of its history, too. The Association’s commitment to Queenston’s preservation is evident in the various landmarks, homes and parks that have been lovingly restored and maintained.

Located near the Niagara Parkway, the Laura Secord homestead offers visitors and locals a glimpse into 19th century Queenston and recounts the bravery of one of Canada’s beloved heroines! Laura Secord’s 32-kilometre journey can be experienced through an engaging tour of her home and its grounds.

Brock’s Monument and Landscape of Nations

You simply cannot go to Queenston Heights Park without catching a glimpse of Brock’s Monument! Constructed in the mid-1850s, the monument, which was constructed as a tribute to Major General Brock, is one of the oldest war memorials in Canada and stands a jaw-dropping 56 meters high! With over 200 stairs, visitors can get both an exceptional workout and an amazing view of the park if they climb to the top!

Also located in Queenston Heights Park is the Landscape of Nations, a living memorial that commemorates the arrival of the Six Nations warriors, whose contributions ensured victory during the War of 1812. In addition to statues of Major John Norton (Teyoninhokarawen) and John Brant (Ahyouwa’ehs), visitors can learn and reflect on the Peace and Reconciliation ceremony, which was held on August 31 and September 1, 1815. You can visit the Landscape of Nations virtually, too!

The Legacy Lives on in Niagara on the Lake

In addition to its history, locals can enjoy the stunning homes, restaurants and culture of Queenston village by purchasing or selling their property today! Niagara-on-the-Lake’s team of REALTORS® are committed to not only sharing NOTL’s architecture, history and community, but also helping you find a home that caters to your lifestyle. Start living your dream by calling our team